This study commissioned by the PAF, the IFC Excellence in Design for Greater Efficiency (EDGE) and the Energy Sector Management Assistance Program (ESMAP) and produced by Carbon Trust, aims to understand how a climate auction model based on the Pilot Auction Facility (PAF) could be used to catalyse energy, and resource efficiency in the residential building sector, focusing on new build developments. A qualitative review of six countries[1] was carried out to inform the basic conditions that would need to be met for the climate auction mechanism to be successfully rolled out to the residential building sector. India was then selected as a case study to carry out a quantitative assessment of the potential impact of the mechanism[2]. 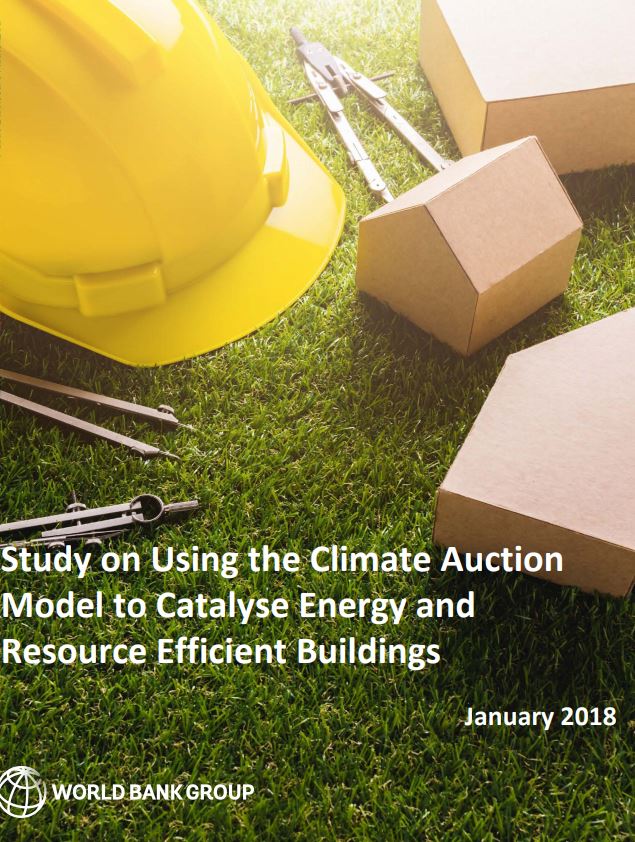 Green building definitions were reviewed to establish the metric upon which the auction should rely to assess bids and award the climate auction’s incentive. It was concluded that the auction mechanism should use metrics that are relevant, credible, simple, practical and global: as such, the primary metric should be modelled percentage reduction in energy consumption per unit area versus a local benchmark. This is because the housing sector already uses unit area (usually square meters) as the basic input to assess projects, making an auction mechanism easy to understand and thus more likely to succeed.   Energy consumption is also directly linked to carbon emissions from buildings, providing a direct link to climate change mitigation.

An assessment of three global and five national green building certification schemes[3] was then carried out to identify which would be most suitable to be used as the benchmark scheme for the purposes of the auction. Each scheme was evaluated across four categories:

1.       Uptake: What is the scheme’s geographical coverage? How many certifications have there been to date?

EDGE achieved the best scoring against each criterion. It was therefore recommend that the EDGE scheme could be adopted as the default certification scheme for an auction, but that any schemes able to demonstrate their alignment with EDGE in terms of quantitative estimates of energy savings and third party auditing of such savings should also be accepted.

This phase of the study sought to answer a number of key questions regarding the translation of the climate auction mechanism to the building sector. These were distributed across three key elements:

1.       Geographical targeting: Where could an auction be implemented (e.g. single city, whole country or some other geographical boundary)?

2.       Sectoral targeting: What factors are likely to be important for an auction (e.g. income-level, building type)?

3.       Participant targeting: Who is likely to be bidding into the auction (e.g. real estate developers, construction companies, project aggregators)?

In terms of geographical targeting, UN population data showed that the vast majority of future population growth and thus housing demand will come from large (300k+ inhabitants) cities. Based on this data, the most relevant target for the auction mechanism is large cities in middle income countries. This produced a list of six target countries…

A policy review of the six target countries also showed that testing the auction mechanism at the level of a single city or state within a single country, or multiple cities within the same country at most, gives the highest chance of success. This is because political responsibility for housing is usually devolved at state or even municipal level, and also because in larger countries climatic variation would make comparing bids nationwide more complicated[4] (equally costed bids might deliver widely divergent water savings in dry versus wet areas, for example).

In terms of sectoral targeting, income level was found to be the most salient dimension, which incorporated other considerations such as building type. Four income segments (low, social housing, middle and high income) were assessed against five criteria of relevance to the auction mechanism (potential for poverty reduction, potential for carbon reduction, readiness of the green supply chain, competitiveness and complexity of the housing value chain, and additionality of the auction mechanism). Middle income stood out as a priority, while low income presented the greatest challenges, with social housing and high income in the middle. The middle income segment has the best balance across all indicators.

Finally, in terms of participant targeting real estate developers were identified as the most suitable target bidders for the auction. This is because they will have ownership of the crucial design and engineering segment of the value chain, which is when decisions that will determine the “greenness” of a building are made.

Cost-benefit analysis of the potential auction in India

India was chosen as a case study to carry out a quantitative assessment of the potential impact of the auction mechanism. This assessment was carried out using the EDGE online modelling tool and cash flow analysis.

While the Indian government has commitment to reducing emission intensity by up to 35% on 2005 levels by 2005, and buildings are mentioned in the NDC as one of the key levers to achieve this goal, no explicit mention is made of building-specific targets, and no national policies exists that incentivise green new build (UNFCCC, 2015).

Based on this, a USD 50 million auction could potentially expect to catalyse 1.7 to 2.9 million m2 of green building space[6], delivering between 1.4 and 2.3 MtCO2 of carbon savings, 1,400 to 2,100 GWh of energy savings, 56 to 146 bn litres of water savings, while reducing energy bills for 100,000 to 410,000 people. The highest carbon, energy and water savings would be in the lower middle income segment, while the highest number of people supported would be in the low income segment.

A 50 million auction would also create greater or equivalent total savings in the economy of the target country, largely benefitting the poorest citizens in the lower income segments. This would be highly dependent on discount rate, but at 10% up to 60 million USD in energy savings could be created, while with no discount rate savings would amount to USD 250 million.

The auction could also support an awareness raising effort to increase understanding of the financial benefits associated with green buildings among Indian consumers, particularly in the lower income segments.

The overarching aim of a potential auction should be to keep the mechanism as simple as possible to maximise chances of success. Based on the analysis described in the previous chapters, four main eligibility criteria have been identified. These are mostly focused on ensuring that the process is kept simple for bidders, while guaranteeing a minimum level of energy and carbon savings and poverty reduction.

1.       The financial incentive should be awarded to bids putting forward the lowest price per square meter and achieving a minimum performance improvement of 20% in energy use, water use and embodied energy over the local baseline (as per EDGE criteria). Equivalent local certifications should also remain eligible should they be able to demonstrate to the auction host they are using a comparable process.

2.       Bids should only be accepted from developments expecting to sell housing units at or below a given price to ensure that developers targeting the higher income segments of the population are not subsidised – this should be aligned with the considered government definitions of housing affordability.

3.       There should be no limitation on which type of entity is allowed to bid; however proposed developments should have secured land rights before being allowed to bid.

4.       Overall, real estate developers and housing associations represent the main target for a potential auction and should be targeted by awareness raising and promotion efforts.

The option to receive the financial incentive should be awarded when the preliminary certification is achieved, after the design phase. In line with the results based principle of the climate auction model, the actual payment would be disbursed upon confirmation of certified status by a third party auditor at construction completion.

Eligibility criteria could be extended or altered to meet funder requests or World Bank priorities but it is recommended that these are only considered after an initial run of the mechanism in the housing sector has proven successful.

Different weightings could be applied to savings, or the focus could be directly on a particular kind of savings, such as carbon or energy. Other criteria which could be considered include poverty reduction criteria, an urban density/proximity to city centre criterion, a vulnerability to extreme weather event, or a waste management criterion.

[2] The choice of India as a case study country is by no means an indication a preferential positioning of the country vis a vis others for the initial implementation of the auction mechanism. The ultimate decision on when, where and how to implement the mechanism will depend upon discussions between the World Bank, potential programme funders, and other relevant stakeholders.

[4] While there is nothing that would prevent an auction being piloted at national level, state-level deployment would be simpler and as such maximise the chances of success. National level scale up could follow the initial pilot demonstration.

[6] Large developers such as Tata Housing, DLF or VHBC might have up to 7 million m2 under construction at any point in time, while medium sized ones such as 3C or VGN could have 2-3 million m2.